Deshaun Watson suspended – What does it mean? And what’s next for the QB and the Cleveland Browns?


Editor’s note: This originally ran Monday and has been updated with the news the NFL is appealing Deshaun Watson’s six-game suspension, seeking a tougher penalty for violating the league’s personal conduct policy based on accusations ranging from inappropriate behavior to sexual assault during massage sessions.

More than two years after the first civil lawsuit was filed against Deshaun Watson, disciplinary officer Sue L. Robinson has suspended the Cleveland Browns quarterback for the first six games of the 2022 season.

Robinson, jointly appointed by the NFL and NFL Players Association to rule on the case and administer any punishment, listened to arguments from the league, the union and Watson’s attorney during a three-day hearing held in her home state of Delaware in late June. The NFL had been pushing for a suspension of at least a year, while the union and Watson’s attorney argued that the quarterback should not be suspended at all. The sides discussed a potential settlement all the way up through the hearing, but they could not agree to a deal.

The league issued an appeal on Wednesday and said NFL commissioner Roger Goodell will determine who will hear the appeal. Under the CBA, Goodell has the option to consider the appeal himself or he can appoint a designee to do so. The union also had the right to appeal Robinson’s ruling, although it issued a statement Sunday night saying it would “stand by her decision” and not appeal. The NFLPA has two business days to file in writing a response to the NFL’s appeal. Sources told ESPN’s Jeff Darlington on Wednesday the NFLPA was preparing to sue the NFL in federal court if it appealed Robinson’s decision. 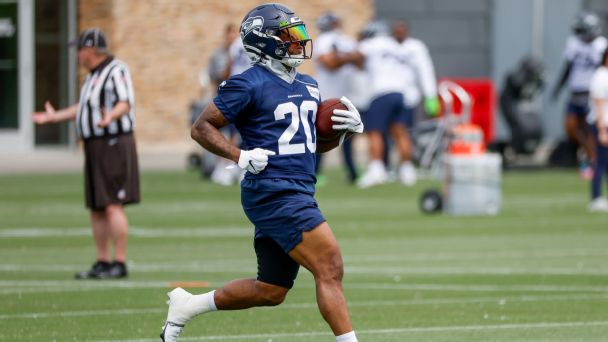 Ultimately, Robinson’s 15-page conclusion stated that although Watson violated the personal conduct policy, there was not enough evidence to justify an indefinite suspension.

Since March 2021, 25 civil lawsuits have been filed against Watson, accusing him of actions ranging from inappropriate behavior to sexual assault during massage sessions. One of the 25 lawsuits was dropped after the judge ruled the petition had to be amended with the plaintiff’s name. Watson and 20 of the other plaintiffs agreed to settle their lawsuits in late June. Early Monday morning, Houston attorney Tony Buzbee told ESPN’s John Barr that Watson agreed to settle three of the remaining four active lawsuits against him.

In mid-July, the Houston Texans reached settlements with 30 women who were prepared to make claims against the organization for its alleged role in “enabling Watson’s behavior” while he was still with the team, according to Buzbee. One of those 30 women had filed a suit against the Texans in June, but that case, Buzbee said, was also settled.

Watson has maintained he is innocent of the allegations. Two grand juries in Texas declined to pursue criminal charges against Watson earlier this year. The Texans traded Watson to the Browns in March after the first grand jury announced it would not indict Watson.

Now that Robinson has ruled on Watson’s suspension, what is next for the quarterback and the Browns?

Where does Watson go from here?

He has the right to appeal, but the NFLPA issued a statement Sunday night saying it would not appeal Robinson’s decision, and called on the NFL to do the same: “Every player, owner, business partner and stakeholder deserves to know that our process is legitimate and will not be tarnished based on the whims of the League office. This is why, regardless of her decision, Deshaun and the NFLPA will stand by her ruling.” According to the CBA, any appeal, either from the NFLPA or the league, “shall be in writing within three business days of the Disciplinary Officer’s decision, and any response to the appeal shall be filed in writing within two business days thereafter. The appeal shall be limited to arguments why, based on the evidentiary record below, the amount of discipline, if any, should be modified.” After that ruling has been made, the CBA says, “The Commissioner or his designee will issue a written decision that will constitute full, final and complete disposition of the dispute and will be binding.” Now that the NFL has appealed, the NFLPA has until Friday to file a written response.

What suspension length did the Browns expect when they acquired Watson?

The consensus within the organization in the immediate aftermath of the trade was Watson would probably be suspended in the range of four to six games, according to sources. When the Browns first made the trade, they knew a suspension — even a season-long one — was possible. They made a commitment to Watson, signing him to a five-year contract worth $230 million fully guaranteed, the richest deal in NFL history for any player. And sources say they remain committed to him.

Will the $230 million in guaranteed money remain?

Most of it will. Watson will lose $345,000 total in game checks from the six-game suspension. It appears he will keep the rest. In addition to Watson’s contract was a disclosure form to address “paragraph 42,” which, in the contract — pertaining specifically to allegations already made — protects Watson from losing any guaranteed money in the event he’s suspended for the 2022 or 2023 seasons while also preventing the Browns from voiding the contract if he were suspended. But the question probably is moot, anyway. The Browns have given every indication they plan to move forward with Watson as their franchise quarterback, according to sources. There’s nothing to suggest that will change now that the Browns have some clarity on discipline from the league.

What does the Browns quarterback room look like to start the 2022 season?

It won’t include Baker Mayfield, who was traded to the Carolina Panthers on July 6. The Browns have been planning to have Jacoby Brissett — who has 37 career starts in New England, Indianapolis and Miami — take over as their starting quarterback during Watson’s suspension. With Josh Dobbs as the only other quarterback on the roster, Cleveland brought in former first-round pick Josh Rosen on a one-year deal. Rosen was the No. 10 pick in the 2018 draft and has spent time with five NFL teams. He will compete with Dobbs for the backup job behind Brissett. The Browns could also consider making a trade for Jimmy Garoppolo, who remains on the block in San Francisco, as a bridge while Watson is out.

When can Watson rejoin the Browns?

What if more accusations surface, or what if he’s found liable in the remaining lawsuit?

Given that Robinson already opted against an indefinite suspension, the CBA doesn’t provide clear guidance for such a scenario. That said, the NFL had the opportunity to present the case of the remaining active lawsuit to Robinson. And if new allegations surface, the league could always investigate to determine if they too violated the personal conduct policy.

Why you should dance barefoot ep 6 zaouli traditional dance #shorts

No Result
View All Result